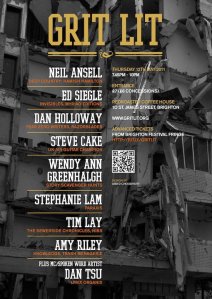 OK, so technically I was last on at Brighton Fringe’s Grit Lit because I was coming from work and after being snowed out of December’s show I was paranoid about not missing my slot, but I will at least forever deludedly think of it as the night I headlined. 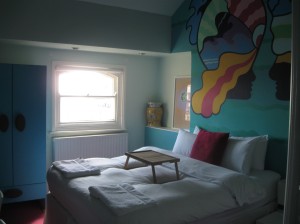 But I really did get to stay at England’s best hotel, Brighton’s Artist Residence.

This time the roads were clear, the sun was shining, and there was not a flake of snow in sight. We’d even had time to spend an hour exploring The Lanes. 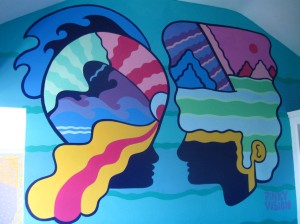 Grit Lit’s regular haunt is Redroaster,  a dark, urban-timber-chic cafe that did, indeed, seem to have a food bar sporting the marvelous chocolate confections I’d been hearing about. The crowd was fantastic – there must have been 50 or 60 people packed in. Much more formal than an eight cuts gathering – chairs! And tables! – but fabulously appreciative. Best of all was getting to meet people from twitter, @Quackwriter, @undividual, and our very own New Libertine @federay.

There was a wonderful mixture of subjects and delivery styles, giving the evening a great rhythm. There was hip hop from dan Tsu, dark slipstream from Wendy Ann Greenhalgh, wild excess from Steve Cake, incredibly moving raconteurship from Neil Ansell, and lyric delights from Amy Riley and Ed Siegle. My personal favourites were Steph Lam’s sinister tea-making Mrs Sadler, which was pure Roald Dahl, and Tim Lay’s dark, Xanax-fueled far-Eastern urban nightmare that read like Ryu Murakami and J G Ballard shaken up into an ice-chilled episode of cold turkey.

The crowd was fabulously receptive to The Last Fluffer in La La Land, laughing and looking away with that mix of awkwardness and cheer that the piece is designed to eke out. It was a marvelous night. I’d urge anyone near Brighton to go down to the next staging, and I very much hope I might be able to work with Tim and Amy, our tireless organisers, again. 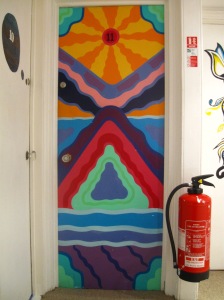 Artist Residence was the perfect place to prepare beforehand and crash afterwards. The idea is simple and brilliant. Each room in the hotel is given over to a local artist to mould in their image. We were staying in Pinky’s Vision, a Yellow Submarine-style psychedelic trip of a room with a sea view of the derelict Western Pier. The art, which spills out into the staircases, and the gallery downstairs, is only part of the chilled-out indie feel of this place. The staff – we were met and dispatched by Anna, whose mix of helpfulness, friendliness, and relaxedness was pitch perfect – are bohemian and brilliant, and there are lovely touches like the postcard feedback forms, the little notes in your room, and the breakfast in a bag that’s left outside your door.  I’ve left some books there for future guests, in a bid to be just a little part of the hotel’s future, but I know that’s not where my involvement with Artist Residence will end. I’ll be back to stay more than once. 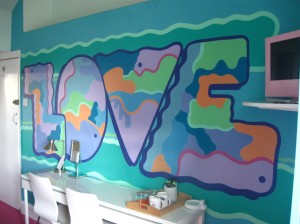