The Internet is Incidental: In Conversation with Tao Lin and Ben Brooks

I hope she succeeds. I hope tonight helps her succeed. I am already anxious. Now I am more anxious.

Tao Lin and Ben Brooks are late. It is nearly time for the event to start. I think, I am going to sit in the bar with an empty glass of pineapple juice and downstairs people will be watching three empty chairs and they will go home and talk about whether the event was real and whether Tao Lin had really cancelled his shows and just not told anyone except that he had already told the whole internet. And eventually someone embarrassed will come upstairs and say it’s time for me to go home too.

Just as I’m getting vertiginous balancing on the wait/go/risk understaying/risk overstaying fulcrum Tao Lin and Ben Brooks arrive. They have an entourage. I want a publisher so I can have an entourage, I think. I don’t know what to expect. I sort of expect Tao to be gauche/diffident/aloof and Ben to be “sweet.” They both shake my hand and introduce me, incoherently, to their entourage. They are completely wasted. They move their mouths a little. I’m not sure if it’s words that come out. I feel an overwhelming urge to play them mercilessly for the audience. But that would be unprofessional. Bu that would be fun. But. 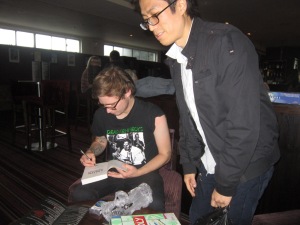 It’s time to go downstairs. Progress is slow. Tao is disconcerted at the thought of having to read and looking at his copy of Taipei like it’s made of strange alien metal and flicking through pages, mostly upside down, and there are lots of stairs and probably he will fall.

The room is full. On the end of a row I see Joe Briggs. On the end of the row in front of him I see Rohan Quine. I think, I wish Waterstones would put on an event for them. Later, the three of us are in a coffee shop Soho and Joe is talking about how there is no passion in punk journalism and Rohan is talking about biographies of Francis Bacon and I think even more these are the kind of creative people Waterstones should be promoting if they want to reach a wider audience.

We are miked up. I get a massive cornetto mic and Tao and Ben get neat lapel things with packs that go in their back pocket. I wonder if it feels a bit like hierarchy (I wonder this again when I am introduced as “Dan Holloway”. I am Dan Holloway but people would be forgiven for thinking “and so what ?”). Towards the end of the interview Tao picks his mic off his collar and alternates talking into it and eating it and grins and says “my publicist thinks I’m being naughty again.” I warm to Tao immensely. He is mischievous and lost and I wonder if he really is and what percentage of it is part of his brand and if it will ever be possible to know and if he even knows and if he wonders if he will ever know, and I feel sad until I think that’s too kitsch and contrived so I carry on listening to what he has to say which by then is all about the mushroom trip that led to the deletion of his internet presence (and I wonder for a moment when he talks about leaving his body and intensity if we’re back in the 1960s). Only internet Tao wasn’t deleted because of the cooling off period. Just his tumblr (the interview ends with him saying “see, we’re not the tumblr generation. Neither of us even has a tumblr now”) and his to do list. I make a quick aside that if your to do list gets too long evidently the thing to do is take bad mushrooms and magic it away. Tao doesn’t understand “to what?” he asks. “To-do list” I repeat. “”To what? A to what what?” It is like a scene from the book tour in Taipei. I don’t know whether I want the floor to swallow me or whether I am loving this. The event is being filmed. I hope it will be posted. I imagine “Tao Lin To What” going viral. The event is being filmed by the publisher. It won’t be posted. It won’t go viral. There will just be occasional tweets that tail off and are drowned out by the next mildly interesting trainwreck.

Tao has mumbled his way through a couple of pages of Taipei, punctuating with “this bit’s boring” and “am I done yet” and fits of the giggles. Ben reads from Lolito, the scene where Macy and Etgar sit down in a restaurant and Etgar shows his blissful unawareness of any of the mores of social dining. Ben kind of chews his words. Whether this is because he is wasted or because he is sidling up to the lapel mic or because he is cultivating a mannered loll that will in later years manifest itself as a full Will Self-ish word chew I don’t know. But I spend longer wondering than listening to the reading. I tune in to hear him use the description “claw-like” to describe a waiter holding a wine bottle. I recall Tao saying “carb-like” in his reading and wonder if the two had arranged some kind of crustacean dare.

Ben reads well. He pauses at the right places for the audience to get just how funny the scene is. I like him. He is endearing. He is cute. Ben Brooks uses the word “cute” a lot. Etgar’s dialogue is stilted because it sounds cute. Etgar is cute. Interestingly – worryingly? – Etgar is not an unreliable narrator. But he is cute. I wonder how unreliable Ben Brooks is being in narrating this. He says his characters are 14 and 40 respectively. That is unreliable. 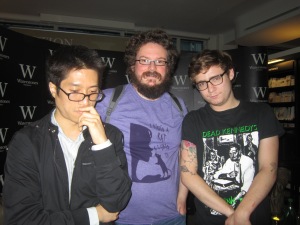 Tao and Ben mumble to each other. And giggle. They pebbledash the giggles and ummms with some interesting statuses. “The internet is incidental” they agree when I ask whether the internet is a benign or a malign presence in their work. This is what I hoped they would say. I think it’s true. I think that Tao finds the whole of life alienating. He says he doesn’t know what alienating is but he does know that while he was on mushrooms he thought he was possessed by an alien. They share more non-verbal in jokes and I ask them about solipsism. Tao says he doesn’t know what solipsism is and people should google it. I think that’s solipsistic. Then he says that all writing is solipsistic, which I think is right. Then he and Ben take it in turns to whisper not really very obscure literary critical phrases like existential nihilism into their microphones and then there are questions and I ask why they wanted publishers and they agree “money” and Tao says “If I self-published I’d be fucked forever” and people queue to have their books signed. There is a table set up for this.

Tao and Ben don’t sit at the table, they stay in their armchairs and people come to them like a medieval court or religious pilgrims.

2 Responses to The Internet is Incidental: In Conversation with Tao Lin and Ben Brooks